The Maplewood Marine Restoration Project is located on the north shore of Burrard Inlet, approximately two kilometres east of the Ironworkers Memorial Bridge, in a marine site that was identified as a restoration priority by the Tsleil-Waututh Nation. The site lies within a large marine tidal area immediately south of a wildlife conservation area. The upland Maplewood Flats Conservation Area is managed and administered by Environment Canada and operated by the Wild Bird Trust of British Columbia. 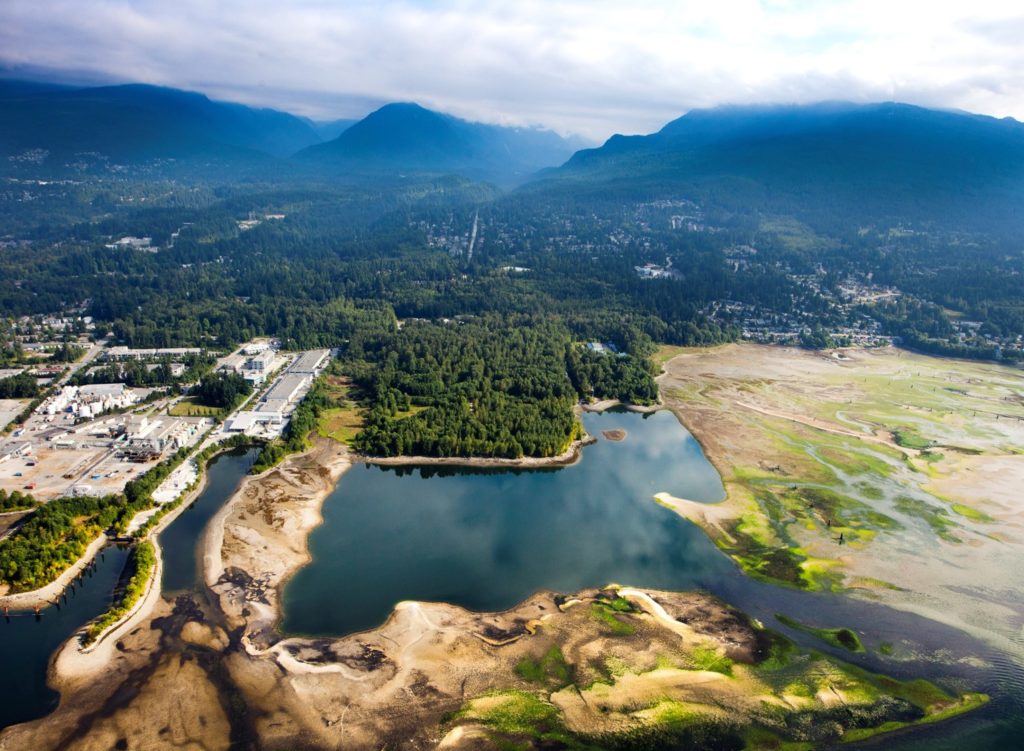 The project site is located within a deep waterlot basin – up to nine metres deep – that was dredged in the 1940s to support a gravel extraction business and was later used as a log storage area. The project is anticipated to enhance approximately five hectares of low-value marine habitat into higher-value marine habitat for fish, birds and other wildlife.

The project will be delivered by the Vancouver Fraser Port Authority’s Habitat Enhancement Program, which focuses on creating, restoring and enhancing fish and wildlife habitat to help maintain a balance between a healthy environment and future infrastructure development that may be required for port operations. A portion of the marine habitat created at the project site will be used to fulfil the fisheries habitat offsetting requirements for the Centerm Expansion Project, as determined by Fisheries and Oceans Canada.

Construction for the Maplewood Marine Restoration Project wrapped up earlier this year. During construction, we placed nearly 230,000 cubic metres of sand to restore and raise the Maplewood basin floor, which will support a variety of shellfish and crab and allow marine plants like eelgrass to establish. Eelgrass provides important refuge and nursery habitat for juvenile fish. We also placed over 13,000 tonnes of rock to create a rock reef and other features which will support various kelp species and contribute to an increase in the diversity of fish and wildlife in the basin.

The next step is an eelgrass transplanting pilot project this fall. Harvesting locations will be decided through consultation with Indigenous groups, starting with detailed scuba dive surveys conducted at two proposed eelgrass donor sites, Bedwell Bay and Roberts Bank.

This pilot project will increase the overall understanding of eelgrass transplanting for future restoration and offsetting opportunities. Collaboration with Indigenous groups involved in the Maplewood Marine Restoration Project will be important throughout the pilot project planning and implementation.

We extend our thanks to Tsleil-Waututh Nation for their collaboration on this project, to Musqueam and Squamish Nations for their involvement, and to local residents, the staff at Environment Canada’s Pacific Environmental Science Centre, members of the Wild Bird Trust, and the District of North Vancouver for their understanding and patience during construction, and for their participation in the design, permitting and construction of this project.

Our approach to public and stakeholder engagement is based on two-way communication and open dialogue, working together to ensure the community, the environment and the economy are all considered during project planning.

The location of this habitat enhancement project was chosen based on input from stakeholders and Indigenous groups.

During engagement, we asked you to provide feedback on the Project team’s proposed notification methods for construction and project updates, and a proposed ecological or cultural feature. We held an open house on October 2, 2018.