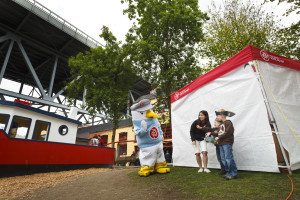 We are active in each of our neighbouring communities, whether it’s by building infrastructure projects, supporting local community program or contributing to the economy through jobs and wages. We are proud to partner with all our communities. Our community pages include information specific to the communities that border our jurisdiction. Learn more about port activity in your community.

Belcarra: This West Coast-styled village is situated along the shores of Indian Arm. Nestled at the foot of the mountains, it is often considered an island community committed to preserving its natural surroundings.

Burnaby: The third largest city in B.C., Burnaby is bordered by the Burrard Inlet to the North and the Fraser River to the south. This community is home to three marine terminals and the largest lake in the Lower Mainland.

Coquitlam: Coquitlam means “red fish up the river” in the language of the Coast Salish people who have lived in the area for over 9,000 year. Today, Coquitlam hosts rail facilities vital for Canadian trade through the Port of Vancouver.

Delta: Encompassing three residential areas, this community has deep roots in farming and is home to the Port of Vancouver’s largest container terminal. Residents enjoy mountain vistas and wide-open space.

Langley (City): An economic centre in the heart of the Fraser Valley, the City of Langley is a 10-square kilometer area. Originally known as “Innes Corners” and “Langley Prairie,” today the community is an active industrial and commercial land base attracting trade from throughout the region.

Langley (Township): Known as the birthplace of B.C. and home to Fort Langley, this growing community is a vital corridor for Canada’s trade and offers a mix of urban, rural and historical appeal.

Maple Ridge: This gateway community is located between the Fraser River to the south and Golden Ears mountain to the north. Since its humble beginnings, Maple Ridge has grown to become a diverse community with thriving local industry.

New Westminster: Known as The Royal City and the oldest city in western Canada, this urban community along the Fraser River prides itself on its rich history, with a focus on the future.

North Vancouver (City): Bordering the Burrard Inlet’s north shore, the City of North Vancouver has its roots in a strong marine and ship building history. Today it is a diverse community living and working alongside its thriving industrial waterfront.

North Vancouver (District): Home to some of the Port of Vancouver’s busiest terminals, the North Shore is also surrounded by mountainous terrain and steep winding roadways earning it a reputation for adventure akin to no other.

Pitt Meadows: Surrounded by natural beauty, the City of Pitt Meadows offers a break from the hustle and bustle of urban life. Pitt Meadows prides itself on its strong sense of community and rural charm.

Port Coquitlam: Surrounded by the Fraser River to the south, the Pitt River to the east and the Coast Mountains to the north, this community brings together small town spirit with its naturally beautiful surroundings.

Port Moody: Situated at the tip of the Burrard Inlet and the base of Eagle Mountain, this city celebrates the arts while blending its historical rail and port roots with the natural environment.

Richmond: Located at the mouth of the Fraser River, this island city is a meeting place for the West Coast and the Far East. Richmond combines old-world charm with dynamic multicultural attractions.

Vancouver: This port city is home to one of Canada’s most diverse populations. Not only is Vancouver a hub for outdoor adventure and exploration, it is also a gateway to the Asia Pacific.

West Vancouver: Known for its seaside ambiance, this community bordered by sea and mountains, has defined itself over 100 years by its proximity to the waters of Howe Sound and the Burrard Inlet.