Connecting Canada to the world

The Vancouver Fraser Port Authority is the federal agency responsible for the stewardship of the lands and waters that make up the Port of Vancouver, Canada’s largest port. Trade through the Port of Vancouver connects Canadian businesses and consumers with the variety of products that we use every day from markets across the globe, and generates tax revenues and secure employment for local communities.

Supporting national trade objectives on behalf of all Canadians

As a Canada Port Authority, our mandate is to enable Canada’s trade through the Port of Vancouver, while protecting the environment and considering local communities.

Canada Port Authority operations are not financed by tax dollars. We receive revenues from terminal and tenant leases as well as harbour dues and fees charged to shipping companies that call at the port.

Accountable to the federal minister of transport, Canada Port Authorities manage federal lands and waters in support of national trade objectives for the benefit of all Canadians. We do this by leasing the federal lands that make up the Port of Vancouver to independent terminal operators who handle trade through the port, and by providing marine, road and other infrastructure to support port growth and function.

As outlined in the Canada Marine Act, we are required to facilitate Canada’s trade objectives, ensuring goods are moved safely, while protecting the environment and considering local communities. Canada’s trade through the port has been increasing steadily for a decade, and is forecasted to keep growing at about 3.5% annually, so we’re planning for sustainable port growth to ensure Canada remains competitive on the global stage.

Located on the southwest coast of British Columbia, the Port of Vancouver extends from Roberts Bank and the Fraser River up to and including Burrard Inlet. Geographically, the Port of Vancouver includes more than 16,000 hectares of water, more than 1,500 hectares of land and hundreds of kilometres of shoreline, bordering 16 municipalities and intersecting the traditional territories and treaty lands of several Coast Salish First Nations.

The Port of Vancouver is about the same size as the next five largest Canadian ports combined. Home to 29 major terminals, the port is able to handle the most diversified range of cargo in North America: bulk, containers, breakbulk, liquid bulk, automobiles and cruise. As the country’s gateway to over 170 trading economies around the world, the port handles $1 of every $3 of Canada’s trade in goods outside of North America. Enabling the trade of approximately $275 billion in goods, port activities sustain 115,300 jobs, $7 billion in wages, and $11.9 billion in GDP across Canada.

Collaboration is key for sustainable port operations and growth 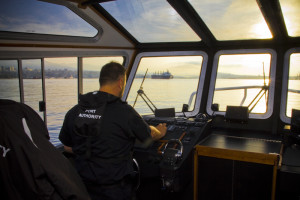 Operations and activity at the Port of Vancouver are complex and include many organizations beyond the port authority. The federal government sets trade policy and decides what goods and commodities Canada trades. Private terminal operators manage loading and unloading cargo through the port terminals. Shipping lines operate the large commercial vessels that call at the port, and railways and trucking companies deliver goods by land to and from the port. Shippers such as retailers, resource companies and freight forwarders contract and pay for the movement of goods.

Our role as a port authority is to ensure goods are moved safely, efficiently and sustainably, and we do this by maintaining and building the land on which terminals are located and the roadways throughout the port, ensuring navigation channels and anchorages are safe and available, and setting traffic control measures, all of which are monitored by our 24/7 operations centre and on-water harbour patrol fleet.

Our Port Information Guide sets out local practices and procedures designed to promote safe and efficient navigation within the waters of the port, and support efforts to protect the marine environment. It includes information such as time and tide windows for ship transit, anchoring controls and restrictions, and minimum clearances between the bottom of a ship and the seabed.

Beyond the supply chain, organizations such as Canadian Coast Guard, Canada Border Services Agency, RCMP and local police oversee safety and security of the port. We collaborate with them on emergency response and safety of navigation channels.

The port authority is also responsible for overseeing port development as Canada’s trade grows—and we do that both by building infrastructure and by reviewing and permitting development projects in the port, such as terminal expansions.

As we prepare for port growth, minimizing impacts of port activities on nearby communities is top of mind. Metro Vancouver is growing rapidly, and expects to welcome one million new residents by 2050, so we’re collaborating with government and industry to build overpasses, underpasses, and other road and rail projects across the Vancouver region. By removing bottlenecks along transportation corridors, we’re able to reduce traffic congestion and carbon emissions, while freeing up new trade capacity for Canadian businesses.