Working together to reduce underwater noise effects on whales

Swiftsure Bank is a known foraging area within the critical habitat of southern resident killer whales, which are listed as endangered in both Canada and the United States. Both countries’ governments have identified underwater noise generate from ships as one of the key threats to killer whales due to its interference with their ability to hunt, navigate and communicate via echolocation.

Currently not in effect

To reduce the impacts of commercial shipping on at-risk whales in this key foraging area, the Vancouver Fraser Port Authority-led Enhancing Cetacean Habitat and Observation (ECHO) Program is coordinating a voluntary vessel slowdown trial at Swiftsure Bank in collaboration with government agencies, Indigenous communities, the marine transportation industry, and environmental groups. During the voluntary slowdown trial, vessels transiting the inbound and outbound shipping lanes at Swiftsure Bank are encouraged to slow down when safe to do so.

The Swiftsure Bank voluntary inbound and outbound vessel slowdown trial is one of three underwater noise reduction initiatives coordinated by the ECHO Program in the Salish Sea. Since 2017, these initiatives have encouraged thousands of ship operators to slow down or stay distanced in southern resident killer whale critical habitat, helping to reduce underwater sound intensity by up to 55% in key foraging areas.

About the 2022 voluntary ship slowdown trial at Swiftsure Bank

This year, the Swiftsure Bank slowdown area has been extended to include both the outbound and inbound shipping lanes, a total distance of 23 nautical miles.

The slowdown will run from June 1 to October 31, 2022. Once the slowdown is in effect, large commercial ships transiting inbound and outbound through Swiftsure Bank are asked to voluntarily slow down to the below speeds: 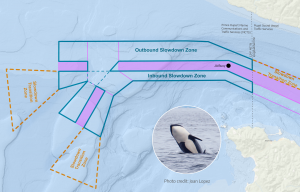 The logistics of coordinating a voluntary ship slowdown trial outside of the port authority’s jurisdiction are complex and involve collaboration with many other advisors and partners. The port authority is very grateful for the ongoing participation and support of our many advisors and partners in both Canada and the United States who contribute to the continued success of these voluntary initiatives. This voluntary slowdown is one of the commitments under the ECHO Program’s Species at Risk Act, Section 11 Conservation Agreement.