Sustainable infrastructure: a path for Canada’s future | Port of Vancouver
Skip to content
Back to stories People Connected

In and around the Port of Vancouver, investments in new and existing infrastructure provide many of these same benefits and, most importantly, are necessary to meeting Canada’s growing trade demands. With the right infrastructure in place to handle the nation’s increasing international trade, the port will be able to continue to provide vital market access to Canadian consumers and businesses, while remaining competitive on the global stage.

As a Canada Port Authority, our mandate is to enable Canada’s trade through the Port of Vancouver, while protecting the environment and considering local communities. Fulfilling our federal mandate under the Canada Marine Act means ensuring Canada can deliver on its growing trade commitments and ambitions now and in the future.

Trade through the Port of Vancouver is forecasted to grow at a rate of roughly 3.5% annually over the next four years, driven by growth in grain, potash, and coal as well as cargo moved in containers. Our year-end statistics reconfirmed this forecast as cargo through the port in 2020 saw a 1% increase over the same time the previous year, with new annual records set for grain, potash, and container trade. Shipping container quantities, measured by 20-foot equivalents or TEUs, also saw record quantities at 3.5 million TEUs, a 2% increase compared to the previous year.

Increasingly, container trade is also playing an important role in the export of agricultural products. Over the past nine years, containerized agri-product exports—like grain, fruit, seafood, meat, and others—have been increasing at a 7.6% average annual growth rate and this is expected to continue. By value, 25% of agricultural products exported through the port are moved in containers and, as such, ensuring adequate container capacity at the port is critical to accommodate the growth in this sector and others. 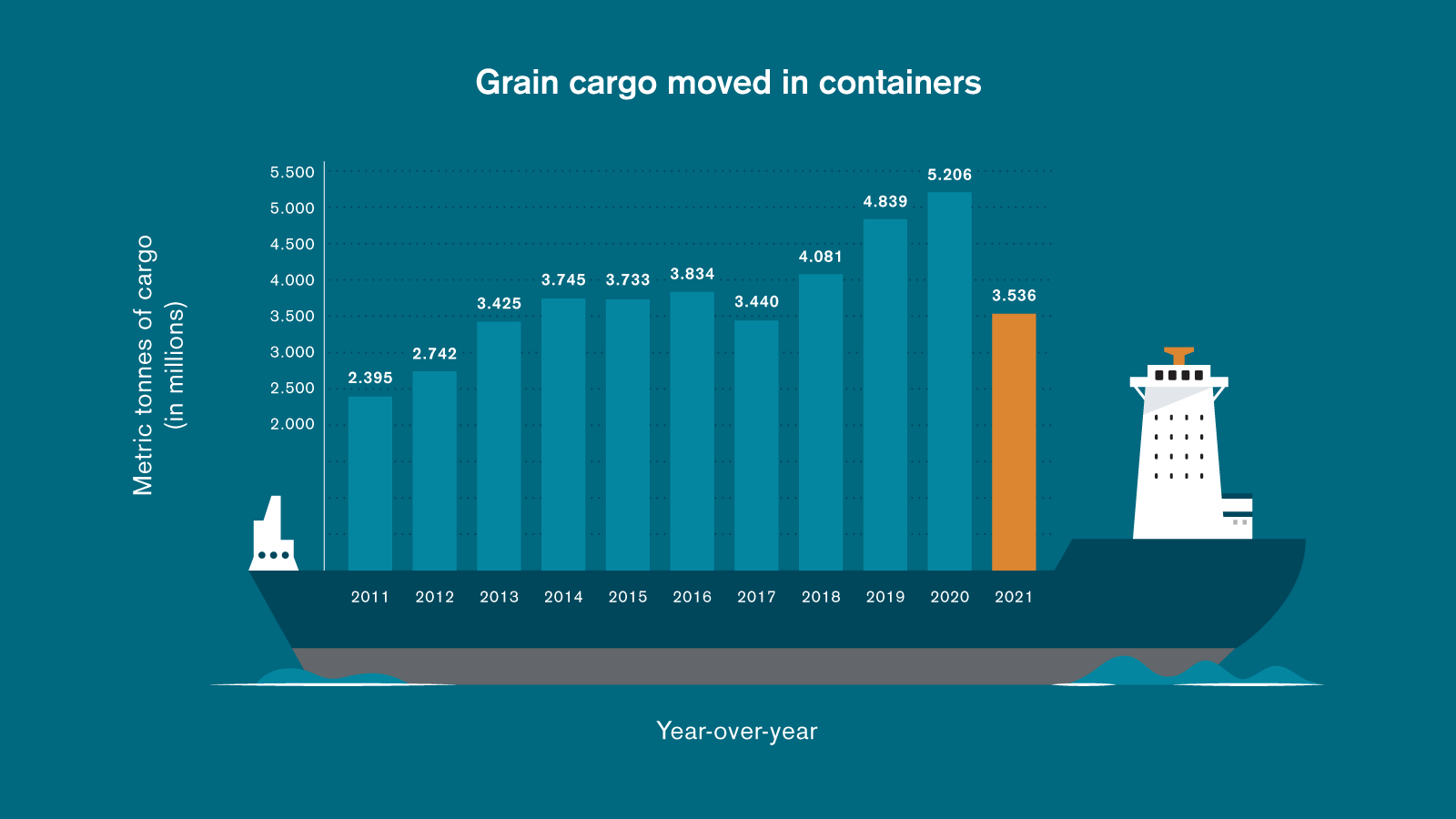 To support trade growth in Canada, we are leading more than $1 billion in infrastructure projects throughout Metro Vancouver—a remarkable amount of project activity. These range from road and rail projects funded by the Government of Canada and industry partners through the National Trade Corridors Fund, to port terminal reconfigurations and new port terminals. We also support partner-led projects that meet the overarching objectives of the Greater Vancouver Gateway 2030 strategy—a collaborative effort to prioritize regional infrastructure projects.

Our road and rail projects range from the construction of overpasses and underpasses to separate roadways and rail lines, to rail corridor widening to allow for more tracks, along with other rail line improvements to enhance the efficient movement of goods through the port and improve public safety. For instance, we are leading the design and construction of a new overpass over the rail lines at Holdom Avenue in Burnaby, British Columbia, part of the Burnaby Rail Corridor Improvements Project. This new overpass will help mitigate the impacts of growing rail and port trade traffic in the area, reducing congestion, and increasing Canada’s trade capacity.

Work has also continued on several road and rail projects in the North Shore Trade Area to improve grain capacity. For example, the award-winning Low Level Road realignment, completed in 2015, increased rail capacity in this area of the port, and in return, benefited coal, potash and grain terminals. In addition, we have reviewed and permitted roughly $1 billion in major investment by port grain terminals.

One of our key terminal infrastructure projects, currently underway in partnership with DP World, is the Centerm Expansion Project and South Shore Access Project, an expansion to the Centerm container terminal located in Vancouver, British Columbia. When the project is complete in 2022, the terminal’s capacity will increase by 60% while expanding its footprint by only 15%. This will help meet the increasing demand for containers shipped through the port. Another is the proposed Roberts Bank Terminal 2 (RBT2) Project, a new three-berth marine container terminal in Delta, B.C. If approved and built, RBT2 will play a critical role in creating enough capacity to meet forecasted container trade through to the mid- to late-2030s.

As we now focus on delivering port authority-led projects and those delivered by our industry partners, we also continue to identify new opportunities to build greater efficiency within the supply chain. To that end, we are engaging and collaborating with all levels of government, industry, Indigenous groups, and the port community. Now, more than ever, we feel it’s critical that we work together to prepare for future trade demands to ensure Canada’s long-term success.