Underpass improvements on the North Shore will enhance Canada’s trade capacity, sustain growth in the gateway, and improve pedestrian safety 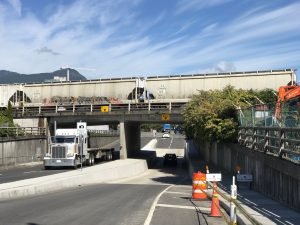 Vancouver, B.C.: The Vancouver Fraser Port Authority and project partners are pleased to announce the completion and the opening of the upgraded Mountain Highway underpass on Vancouver’s North Shore. This project, led by the Vancouver Fraser Port Authority, in collaboration with Western Stevedoring, the District of North Vancouver, CN and Squamish Nation will enhance the movement of trade-related cargo through Greater Vancouver, while improving mobility and safety, protecting the environment, and alleviating the community impacts of growing trade.

Contributing to new road and rail infrastructure will help ease the impacts of growing trade on local communities, while fulfilling the port authority’s federal mandate to enable Canada’s trade through the Port of Vancouver.

Project benefits at a glance:

“The completion of the Mountain Highway Underpass is another milestone in the Government of Canada’s efforts to enhance Canada’s transportation infrastructure and ensure greater long-term efficiency for our supply chains. Investing in transportation infrastructure through the National Trade Corridors Fund is an important part of growing Canada’s economy, while providing more jobs and ensuring the continued movement of goods across Canada.” The Honourable Omar Alghabra, Minister of Transport.

“One of the biggest challenges facing our community is to provide the necessary transportation infrastructure for our economy to stay strong, and to grow.  By deepening the underpass at Mountain Highway, partners on this project ensured the Lynnterm Terminal can accommodate oversized cargo, which in turn will increase import and export capacity and trade opportunities. More efficient movement of cargo also helps to reduce impact of trade-related traffic congestion on our roadways. We still have a lot to do to address our transportation needs in our community but projects like this are important steps forward.” Mayor Mike Little, District of North Vancouver.

“We are pleased to be involved in meaningful partnerships such as these especially when our beautiful culture and artwork has a chance to be in the public eye. For far too long we have been invisible in our own territory and this project shines light and emits a friendly reminder of the shared territory in which we all live, commute and work on. We are honoured to be able to highlight one of our many gifted artists and share their talents with the world to admire. Our hope is that people become more open and welcome to learning more about who we are and where we come from and what we have lived through in the spirit of reconciliation and this is just one small step in the right direction,” said Syexwáliya, Ann Whonnock and Sxwíxwtn, Wilson Williams, Squamish Nation Spokespersons.

“Western Stevedoring thanks the Federal Government, Port of Vancouver and District of North Vancouver for their support on this important project. With the deepening of the Mountain Highway underpass, one of the major bottlenecks to the transportation of oversized cargoes has been significantly improved. Western Stevedoring is now able to attract and handle over-sized cargo for major projects in Western Canada that have previously been imported through US Ports due to restrictions in BC such as the Mountain Highway underpass,” said Dave Lucas, president, Western Stevedoring.

“We are incredibly proud of the upgrades made on the Mountain Highway underpass. Not only will the upgraded underpass allow for significant improvement in the movement of goods to and from the Port of Vancouver to support Canada’s growth in trade, but this is also the first gateway construction project funded by the National Trade Corridors Fund that the port authority has completed,” said Jennifer Natland, acting vice-president, real estate, Vancouver Fraser Port Authority. “Improvements to the underpass will enable the gateway to operate more efficiently and handle anticipated trade growth through the port for years to come”.

Learn more about the Mountain Highway Underpass Project at portvancouver.com/mountainhighwayunderpass.

About the Vancouver Fraser Port Authority and the Port of Vancouver

The Vancouver Fraser Port Authority is the federal agency responsible for the stewardship of the Port of Vancouver. Like all Canada Port Authorities, we are accountable to the federal minister of transport, and operate pursuant to the Canada Marine Act with a mandate to enable Canada’s trade through the Port of Vancouver, while protecting the environment and considering local communities. The port authority is structured as a non-share corporation, is financially self-sufficient and does not rely on tax dollars for operations. Our revenues come from port terminals and tenants who lease port lands, and from port users who pay various fees such as harbour dues. Profits are reinvested in port infrastructure. The port authority has control over the use of port land and water, which includes more than 16,000 hectares of water, over 1,500 hectares of land, and approximately 350 kilometres of shoreline. Located on the southwest coast of British Columbia in Canada, the Port of Vancouver extends from Roberts Bank and the Fraser River up to and including Burrard Inlet, bordering 16 municipalities and intersecting the traditional territories and treaty lands of several Coast Salish First Nations. The Port of Vancouver is Canada’s largest port, and the third largest in North America by tonnes of cargo. Enabling the trade of approximately $240 billion in goods with more than 170 countries, port activities sustain 115,300 jobs, $7 billion in wages, and $11.9 billion in GDP across Canada.