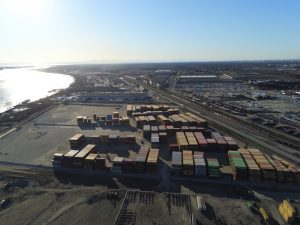 Vancouver, B.C.: The Vancouver Fraser Port Authority announced today that a temporary storage site for empty shipping containers has been set up in Richmond to strengthen local and national supply chains.

In mid-November, 2021, severe flooding in B.C. completely cut off rail service connecting the Port of Vancouver to national supply chains for eight days, exacerbating global supply-chain challenges that have been affecting Canadians throughout the COVID-19 pandemic.

“As partners throughout the Port of Vancouver continue work to clear supply-chain backlogs in the wake of November’s flooding, this new container storage site adds valuable capacity to support activities at Canada’s largest port, which in turn supports local and national supply chains,” said Robin Silvester, president and CEO of the Vancouver Fraser Port Authority.

Container storage sites are vital to support the movement and distribution of cargo to and from the port, and to reduce congestion at container yards, yet the land-constrained Lower Mainland lacks sufficient industrial land for such critical supply-chain functions.

On November 24, 2021, the federal government announced it would contribute $4.1 million under the National Trade Corridors Fund toward a port authority-led project to prepare an undeveloped parcel of federal port land for the handling and storage of empty containers, and the port authority immediately began preparing a formerly undeveloped project site to be a temporary container storage site.

As part of this process, and in line with the port authority’s commitment to work with the Musqueam Indian Band through a relationship agreement, the nation led archaeological monitoring of the site preparations.

The site, which is located on Portside Road at the end of No.8 Road in Richmond, has been prepared in three phases, with the first phase operational in January. The port authority continues to advance construction on the site and expects to see the full site completed by early March.

“Thanks to funding support and a quick response from the Government of Canada, coupled with remarkable efforts by the project team, this region and Canada’s supply chains are already benefiting from needed additional container-storage capacity,” Silvester said. “I would like to thank all the project partners, stakeholders and teams who have worked tirelessly to advance this site so swiftly, to deliver increased supply-chain capacity and resiliency at a pivotal time for the region and the country.”

“The Pacific Gateway plays a critical role in ensuring the movement of essential goods to British Columbia and the rest of Canada, “ said Minister Alghabra. “By investing in our ports and infrastructure such as this container facility, we are keeping Canadian supply chains competitive and ensuring the resiliency of our trade corridors. I look forward to our continued collaboration with the Vancouver Fraser Port Authority; together, we will continue to address transportation issues and provide better solutions for the future.”

”Coast2000 Terminals would like to thank Transport Canada and the Vancouver Fraser Port Authority for their rapid mobilization of resources to make this site available,” said Matthew May, president of Coast 2000 Terminals. “Operating this additional facility on behalf of all gateway partners is a responsibility and a privilege that we are thankful for, and we commit to continue delivering the safe, reliable and professional service our partners have come to rely on.”

“As one of the largest transloaders of wood products, metals and other commodities, we are pleased to have been selected by the Vancouver Fraser Port Authority to operate the container storage site in Richmond,” said Tanjit Kalhar, CEO of Euro Asia. “The initiative taken by the port authority is helping alleviate congestion at facilities storing empty containers. Since operating the facility, we have seen a significant reduction in congestion and an increase of export containers being transported to the Port of Vancouver.”

Upon completion, the storage area will remain operational until July 2022. The site is part of federal port lands and is intended to be used for terminal development in the future.