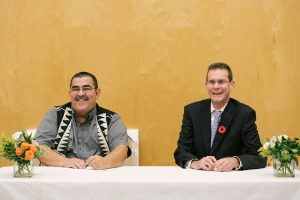 MUSQUEAM TERRITORY, B.C. — As neighbours and partners, Musqueam Indian Band and the Vancouver Fraser Port Authority announce the recent signing of a historic relationship agreement. The agreement creates a framework for a long-term, meaningful relationship between Musqueam and the port authority—one that will advance a strong, shared future marked by mutual respect and reconciliation.

“This relationship agreement recognizes Musqueam’s ongoing stewardship of our territory. It is another fundamental step towards long-term reconciliation through acknowledgement of Indigenous rights to our lands and waters,” said Chief Sparrow. “We are excited to work collaboratively with the port authority to advance our shared goals for a sustainable future, while also providing training and employment opportunities for our people.”

Musqueam Indian Band and the Vancouver Fraser Port Authority co-developed a multi-faceted, long-term agreement that fundamentally reframes their working relationship to better deliver on joint commitments. Through this agreement, the parties will work together to uphold the rights of Musqueam and move towards a more productive and collaborative shared future.

“We look forward to working with Musqueam in the months and years to come – as neighbours and partners – to build a strong future together that will continue to include meaningful dialogue and a mutual respect that will support our shared priorities,” said Silvester.

Musqueam people have lived in the Fraser River estuary since time immemorial. We are a proud and culturally-resilient First Nation of over 1,300 members. About half of our members live in a small portion of our territory known as Musqueam Reserve, located south of Marine Drive in Vancouver. Many of the remaining members live throughout Musqueam’s territory, parts of which are now called Vancouver, Burnaby, Richmond, Delta, North Vancouver, West Vancouver and New Westminster. Our lands and waters continue to support our cultural and economic practices, while serving as a source of knowledge and memory, encoded with our teachings and laws.

About the Vancouver Fraser Port Authority and the Port of Vancouver

The Vancouver Fraser Port Authority is the federal agency responsible for the stewardship of the Port of Vancouver. Like all Canada Port Authorities, we are accountable to the federal minister of transport, and operate pursuant to the Canada Marine Act with a mandate to enable Canada’s trade through the Port of Vancouver, while protecting the environment and considering local communities. The port authority is structured as a non-share corporation, is financially self-sufficient and does not rely on tax dollars for operations. Our revenues come from port terminals and tenants who lease port lands, and from port users who pay various fees such as harbour dues. Profits are reinvested in port infrastructure. The port authority has control over the use of port land and water, which includes more than 16,000 hectares of water, over 1,500 hectares of land, and approximately 350 kilometres of shoreline. Located on the southwest coast of British Columbia in Canada, the Port of Vancouver extends from Roberts Bank and the Fraser River up to and including Burrard Inlet, bordering 16 municipalities and intersecting the traditional territories and treaty lands of several Coast Salish First Nations. The Port of Vancouver is Canada’s largest port, and the third largest in North America by tonnes of cargo. Enabling the trade of approximately $240 billion in goods with more than 170 countries, port activities sustain 115,300 jobs, $7 billion in wages, and $11.9 billion in GDP across Canada.