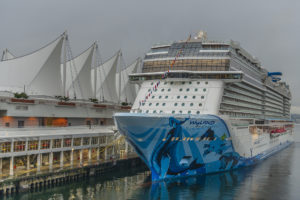 The Bliss is arriving Sunday morning at the east berth of Canada Place where it will pick up approximately 4,000 passengers in Vancouver before departing the next day for the final leg of its journey from Victoria to Los Angeles, after which it will spend the winter offering Mexican Riviera cruises.

In addition to Bliss, three other cruise ships will also be in Vancouver over the weekend, so an unusually high number of cruise passengers is expected at and around the Canada Place cruise ship terminal. The Vancouver Fraser Port Authority encourages travelers and locals to plan ahead to prepare for crowds and increased traffic in surrounding areas.

In advance of the busy cruise ship days, the port authority and Canada Place Operations are offering the following tips to passengers to prepare for their visit to Canada Place.

In addition to extra on-site staff, Vancouver Police Department Traffic Authority members will be managing traffic and pedestrian flows at nearby crosswalks.

The Vancouver Fraser Port Authority is responsible for the stewardship of the federal port lands in and around Vancouver, British Columbia. It is financially self-sufficient and accountable to the federal minister of transport and operates pursuant to the Canada Marine Act. Canada Place at the Port of Vancouver is Canada’s largest cruise port and has been the homeport to the Vancouver-Alaska cruises for more than 30 years. The Vancouver cruise industry stimulates on average nearly $3 million in direct economic activity for each vessel that visits Canada Place, generates nearly 7,000 jobs across Canada, $300 million in wages, and contributes $840 million to national GDP. The Port of Vancouver is Canada’s largest, and the third largest in North America by tonnes of cargo, facilitating trade between Canada and more than 170 world economies. Located in a naturally beautiful setting on Canada’s west coast, the port authority and port terminals and tenants are responsible for the efficient and reliable movement of goods and passengers, integrating environmental, social and economic sustainability initiatives into all areas of port operations. Enabling the trade of approximately $200 billion in goods, port activities sustain 115,300 jobs, $7 billion in wages, and $11.9 billion in GDP across Canada.