Fifty-two marine shipping industry organizations, along with Washington State Ferries, have committed to participate in a voluntary study, the first of its kind, to focus on the relationship between slower vessel speeds, underwater noise levels and effects on southern resident killer whales.

Between August 7 and October 6, 2017, the speed of participating vessels will be reduced through the water in Haro Strait, when it is feasible and safe to do so. Haro Strait is located between Vancouver Island’s Saanich Peninsula and San Juan Island and is an important summer feeding area for the endangered southern resident killer whale population. Approximately 900 deep sea vessels will transit Haro Strait during the study period.

During the research trial, vessels will be asked to navigate over underwater listening stations, also known as hydrophones, at a speed of 11 knots, which is slower than typical deep-sea vessel operating speeds. The hydrophones will monitor ambient and vessel underwater noise, as well as the presence of whales, and automated vessel tracking will be used to monitor vessel speed.

With 100 per cent of the members of shipping associations Chamber of Shipping, Cruise Line International Association Northwest and Canada and Shipping Federation of Canada confirming their intent to participate, the 53 confirmed marine industry participants represent a very significant proportion of large commercial vessel movements through Haro Strait.

“Industry’s commitment to this voluntary research trial is a clear demonstration of the collective focus we have on ensuring a healthy marine environment, and we greatly appreciate our partners’ support,” said Robin Silvester, president and chief executive officer of the Vancouver Fraser Port Authority. “We know that impacts to vessel schedules can be costly to the shipping industry, but we also know the more vessels that participate in the trial, the more robust the scientific analysis will be, and the greater the opportunity for trial data to support evidence-based decision making about future vessel noise management measures.”

“Protecting the southern resident killer whales and other species at risk is a priority for the federal government,” said the Honourable Marc Garneau, Minister of Transport. “I applaud these industry leaders for committing to participate in this trial. The data generated by this study will be important information for the government’s decision-making process around measures to address vessel noise, and we look forward to seeing the results.”

About the Enhancing Cetacean Habitat and Observation (ECHO) Program

The Enhancing Cetacean Habitat and Observation (ECHO) Program is a Vancouver Fraser Port Authority-led initiative aimed at better understanding and managing the impact of shipping activities on at-risk whales throughout the southern coast of British Columbia. The long term goal of the ECHO Program is to develop mitigation measures that will lead to a quantifiable reduction in potential threats to whales as a result of shipping activities. The ECHO Program is one of the port authority’s environmental programs which works to protect and minimize impacts to the environment.

About the Vancouver Fraser Port Authority

The Vancouver Fraser Port Authority is responsible for the stewardship of the federal port lands in and around Vancouver, British Columbia. It is accountable to the federal minister of transport and operates pursuant to the Canada Marine Act. The Port of Vancouver is Canada’s largest, and the third largest in North America by tonnes of cargo, facilitating trade between Canada and more than 170 world economies. Located in a naturally beautiful setting on Canada’s west coast, the port authority and port terminals and tenants are responsible for the efficient and reliable movement of goods and passengers, integrating environmental, social and economic sustainability initiatives into all areas of port operations. Enabling the trade of approximately $200 billion in goods, port activities sustain 115,300 jobs, $7 billion in wages, and $11.9 billion in GDP across Canada. 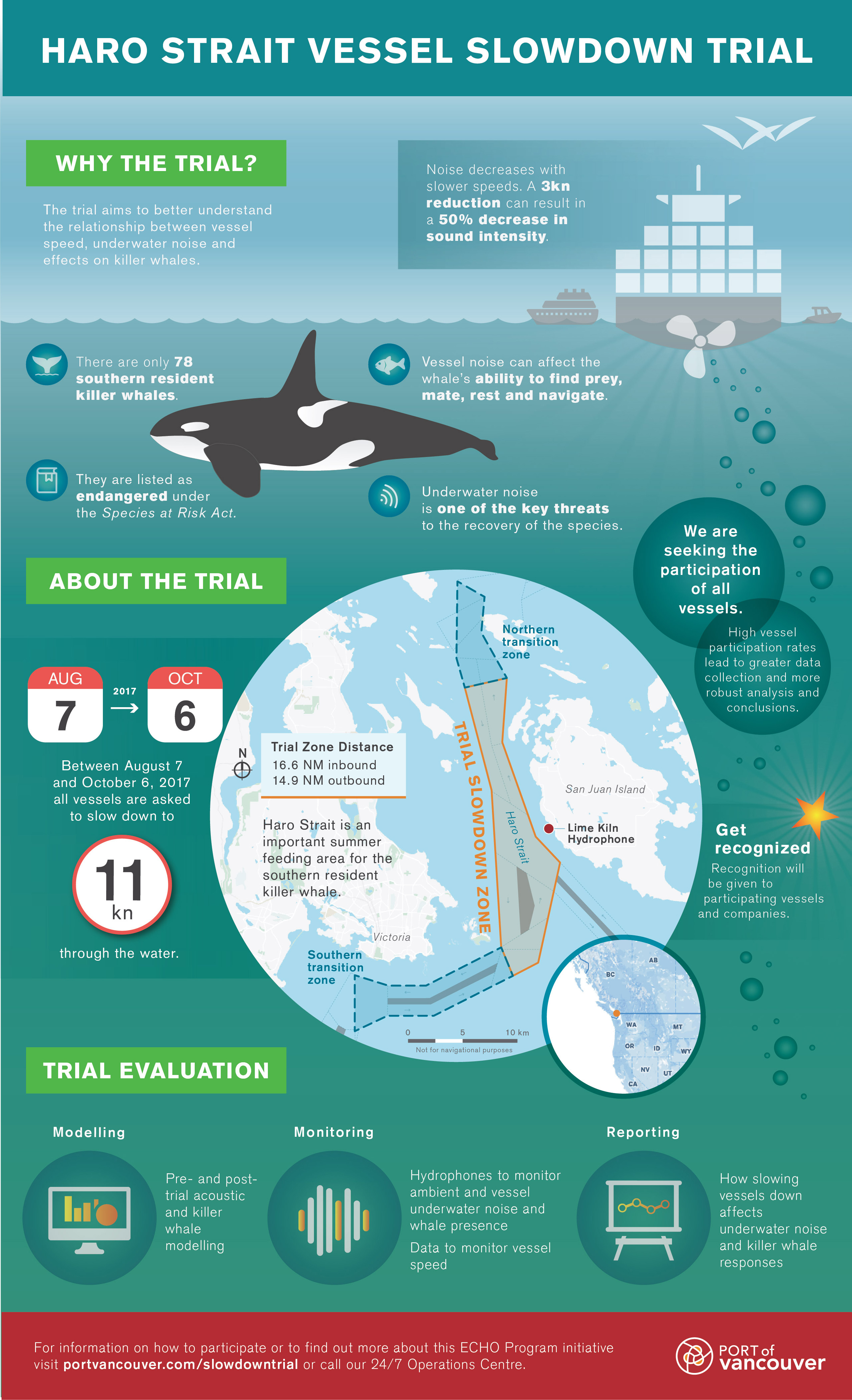