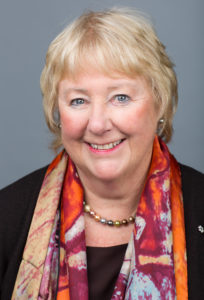 Ms. Rogers replaces outgoing chair, Craig Neeser, whose term of office expires on August 29, 2018. Mr. Neeser has served as chair since 2011 and was originally appointed to the board of directors in August 2009.

“It’s been a great honour to serve this organization, and to serve Canada, for the past nine years through my role as chair of the board,” said Mr. Neeser. “As I reflect on the past decade at the port authority, I think about the people we work with and how we have collectively and dramatically advanced the readiness of the Port of Vancouver to meet Canada’s growing trade. It is now my pleasure to hand off the role of chair to Judy Rogers. With her wealth of experience and impressive accomplishments across a number of sectors and organizations, she is well-suited to lead this board into the next exciting chapter and I wish her every success.”

Ms. Rogers operates her own consulting firm, advising private, public and Crown corporations on government affairs and communications. She held the role of city manager of the City of Vancouver from 1999 to 2008 and is currently chair of the B.C. Assessment Authority. Ms. Rogers is the past chair of the B.C. Housing Commission and the UBC Alumni Association, past president of the Institute of Public Administration of Canada, and served on the board for the Vancouver Organizing Committee for the 2010 Olympic and Paralympic Winter Games.

In 2017, Ms. Rogers received the Order of Canada and is the recipient of two United Nations public service awards. She holds a master’s degree in public administration from the University of Victoria and an honourary Doctorate of Laws from Capilano University.

“I am humbled and honoured to accept this vote of confidence by my fellow board members, and I very much look forward to my new role as chair of Canada’s largest port,” said Ms. Rogers. “The port authority has a challenging mandate and the board has a great responsibility to Canada to ensure the port is ready and open for business. I intend to fulfill that responsibility.”

The chair of the board is accountable to the Vancouver Fraser Port Authority board of directors and is responsible for providing leadership to the board, while fostering relationships between the board and the federal government, the port authority, and port communities. In this capacity, Ms. Rogers will work closely with port authority executives, while maintaining an independent perspective to best represent the interests of the port authority as it focuses on enabling Canada’s trade while protecting the environment and engaging with communities, First Nations and many stakeholders, including the federal government, provincial and local governments, industry and the public.

The Vancouver Fraser Port Authority’s board of directors is composed of 11 members: one federal appointee; one British Columbia provincial appointee; one appointee for the Prairie provinces of Alberta, Saskatchewan and Manitoba; one member appointed by the 16 municipalities bordering the port; and, seven federal appointees recommended by port users.

Learn more about governance and our board of directors.

About the Vancouver Fraser Port Authority
The Vancouver Fraser Port Authority is responsible for the stewardship of the federal port lands in and around Vancouver, British Columbia. It is financially self-sufficient and accountable to the federal minister of transport and operates pursuant to the Canada Marine Act. The Port of Vancouver is Canada’s largest, and the third largest in North America by tonnes of cargo, facilitating trade between Canada and more than 170 world economies. Located in a naturally beautiful setting on Canada’s west coast, the port authority and port terminals and tenants are responsible for the efficient and reliable movement of goods and passengers, integrating environmental, social and economic sustainability initiatives into all areas of port operations. Enabling the trade of approximately $200 billion in goods, port activities sustain 115,300 jobs, $7 billion in wages, and $11.9 billion in GDP across Canada.