Working together to reduce underwater noise effects on whales

Since 2014, the Vancouver Fraser Port Authority-led Enhancing Cetacean Habitat and Observation (ECHO) Program has undertaken numerous collaborative research initiatives to better understand and manage the cumulative effects of shipping activities on whales in our region, in particular the southern resident killer whales. Underwater noise from ships can interfere with killer whales’ ability to hunt, navigate and communicate.

During the slowdown period, hydrophones (underwater microphones) placed on the sea floor measure the noise from passing ships. Listen to the difference between a ship at regular speed and at a reduced speed:

Large commercial ships transiting through Haro Strait and Boundary Pass—key foraging areas for the southern resident killer whales—are asked to voluntarily slow down to the recommended speed for the ship type:

The slowdown began on July 1, 2020, once southern resident killer whales were confirmed to be present in the area. The slowdown will continue until October 1; if whales remain in the area, the slowdown may be extended to no later than October 31.

In 2019, 82% of large commercial ships participated in the slowdown. We thank them for their ongoing participation.

This voluntary slowdown initiative is one of the commitments under the ECHO Program’s Species at Risk Act, Section 11 Conservation Agreement. 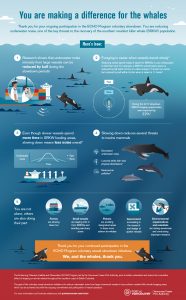 Southern resident killer whales are listed as endangered under both the Species at Risk Act in Canada and the Endangered Species Act in the U.S. As of December 31, 2019, the population has declined to 73 individuals. Both countries’ governments continue to emphasize the need to develop and implement measures to reduce underwater noise generated by ships.

Learn more about how the slowdown efforts, and the efforts of others in the region, are collectively helping to reduce threats to the southern resident killer whales in a new infographic about reducing underwater noise.