Infrastructure and Development | Port of Vancouver
Skip to content 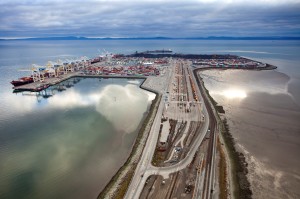 Demand for Canadian trade is increasing, and the Vancouver gateway is growing as a result. The port authority leads development of common use infrastructure both on and off the port, while port tenants lead on-terminal improvements. Projects can range from overpasses and large-scale terminal reconfigurations to minor upgrades to existing facilities.

Development led by the port authority

Infrastructure development proposed or under review

Learn about habitat enhancement projects that the Vancouver Fraser Port Authority has completed in Delta, Surrey and Vancouver.

We work collaboratively with government and industry to fund and deliver infrastructure projects in key trade areas. Our focus is on improving rail and trucking corridors, optimizing available facilities, and building new facilities where needed to meet growing demand.

Container traffic through Canada’s Pacific Gateway is growing. To ensure the timely delivery of the infrastructure that will be needed in the future, we consider opportunities to:

Learn more about our long-term strategy to meet anticipated growth in the container sector, the Container Capacity Improvement Program, and projects underway or proposed.

The Government of Canada’s $14 billion New Building Canada Fund, and in particular the $4 billion National Infrastructure Component, presents a generational opportunity to identify and address transportation infrastructure needs that will support current and future gateway expansion.

Recognizing a regional approach to planning is best, the Vancouver Fraser Port Authority led the creation of the Gateway Transportation Collaboration Forum in 2014, which brings together the British Columbia Ministry of Transportation and Infrastructure, TransLink, Transport Canada, the Vancouver Fraser Port Authority and the Greater Vancouver Gateway Council to identify infrastructure needs in major trade corridors. The forum also works with the regional Mayors’ Vision, the Pacific Gateway Alliance and the New West Partnership.

Key considerations are increasing capacity for new trade and mitigating impacts on local communities. To date, the forum has assembled a preliminary list of 28 potential projects after more than 60 meetings to engage elected local and regional government officials, municipal planners and engineers, and potential project proponents.

In addition to regular meetings and associated project identification and screening activities, there are two studies underway, both funded by TransLink, Ministry of Transportation and Infrastructure, Transport Canada, and the Vancouver Fraser Port Authority. 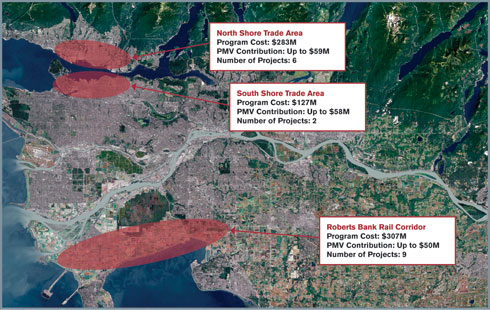 Along with our partners, we developed the Gateway Infrastructure Program in 2008 to invest in infrastructure projects that would facilitate the growth of trade and benefit local communities. Our partners were Transport Canada, the Ministry of Transportation and Infrastructure, TransLink, and the Greater Vancouver Gateway Council.

The focus for these projects was to enhance efficiency and safety of rail operations, increase our ability to accommodate anticipated growth in trade-related traffic, and generate community benefits such as improved local traffic flows and traffic safety, better emergency vehicle access, reduced train whistling and noise, and reduced vehicle idling at level crossings.

The committee meets on an annual basis to provide feedback on the Gateway Infrastructure Fee, recommend options to communicate with port stakeholders about the fee and report back to their respective membership. The committee is composed of ten individuals representing terminal operators, tenants, shippers, shipping lines, industry groups and the port.