What is shore power and how is it used at the port of Vancouver?

As Canada’s largest and busiest port, we must balance the growth in trade with the need to protect our environment and respect the quality of life of our neighbours. Shore power is an emission-reduction initiative and just one of the ways we are improving air quality and protecting human health.

In 2009, the Canada Place cruise ship terminal became the first in Canada and third in the world to offer shore power for cruise ships. Shore power allows cruise ships to plug into the land-based electrical power grid and shut off their diesel generators, thereby reducing noise and emissions.

Canada Place currently has three shore power connection points. The number of cruise ships connecting to shore power has been increasing over the past five years, reducing potential greenhouse gases.

Although it seems straightforward, shore power is not a plug-and-play or one-size-fits-all system. In fact, there are a number of conditions that affect whether a ship can plug in, including configuration of the land-based shore power equipment, the location and limitations of the ship’s shore power connection (if it has one at all), and the availability of power from BC Hydro.

BC Hydro offers a very attractive fixed power rate for vessels connected to shore power to encourage participation in the program. However, because BC Hydro has the right to halt the service if it is needed elsewhere on the grid, such as to homeowners on a cold, winter day, BC Hydro customers are not impacted.

On July 22, 2015, the federal government and the Vancouver Fraser Port Authority announced funding for the installation of shore power facilities for container vessels at two terminals: Deltaport in Delta, B.C. and Centerm in Vancouver. 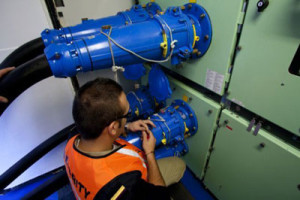 This is a significant milestone for the shore power project. Total project funding is $12 million: $6 million from Transport Canada’s Shore Power Technology for Ports Program and $6 million from the Vancouver Fraser Port Authority. Both shore power operations are expected to be operational by the end of 2018.

We are continuing to take the lead to make shore power connections available at all marine terminals within our jurisdiction, as well as incenting shipping lines to use shore power by offering harbour dues discounts for vessels that are shore-power enabled.

This is a process that will be phased in over the course of a number of years, and we are confident shore power will become more common in the future.