What land is managed by the port authority and how is it managed? 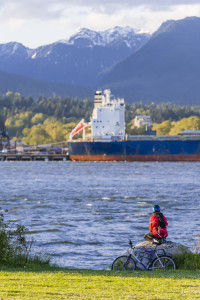 Vancouver Fraser Port Authority is a federal entity that exists to facilitate trade and the national economy. It is Canada’s largest port, hosting a sizable portion of all of Canada’s trade activity, especially from Asia.

All projections indicate Canada’s trade with Asia will continue to grow, and the port will need to grow with it. At the same time, the region is expecting a million new residents over the next 25 years who will need places to live and work.

Given the Lower Mainland is constricted by mountains and ocean, how should the region best plan to develop land for residential, recreational, commercial and industrial use?

At Vancouver Fraser Port Authority, we work hard to make the best use of the federal land we manage. We work with terminal operators to ensure land is being used as efficiently as possible. We are also required to have a land use plan, similar to a municipality’s community plan. Our current plan was released in 2014 after three years of consultation with communities, Aboriginal groups and other stakeholders. The plan sets out present and proposed uses of land as well as areas that will need further study and consultation before their uses can be determined.

Beyond federal port lands, municipal governments are responsible for managing and zoning their lands. Alarmingly, much of that land intended for industrial activities is being converted to other uses, such as residential and commercial. 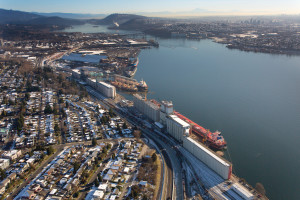 It’s common to think of industrial land in terms of heavy machinery and factory chimneys. However, in the Lower Mainland industrial land is needed for the smooth and efficient movement of goods. Canadians are buying, and trading, more than ever. When you purchase something from your local store, consider how it got there. It quite likely came from overseas, and it needed not only a ship to get here, but also a port terminal, a distribution centre, a truck or two, perhaps a train, and a warehouse at the very least. The closer those things can be together to each other, the more efficient goods movement can be. Forcing distribution centres and warehouses to locate outside the Lower Mainland means more traffic on our roads, increased emissions, higher prices for consumers, and challenges for companies seeking to import and export their goods.

Here are some facts to consider. There are approximately 28,000 acres of industrial land in Metro Vancouver, of which:

Demand for industrial land is projected to absorb between 1,500 and 3,000 acres of land within the next five to 10 years. At that rate, the inventory of remaining land suitable for port and related goods-movement businesses will potentially be exhausted within the next decade.

According to analysis completed by Site Economics Ltd. for Vancouver Fraser Port Authority, every 100 acres of industrial land that is developed results in $1.9 billion of direct and secondary economic benefits. Metro Vancouver reports about 23 per cent (275,000) of the region’s jobs are accommodated on industrial lands. Without a secure industrial land base, we simply cannot compete for new investment and new jobs – jobs for us now and jobs for the next generation.

We would rather not purchase farmland, but if we cannot find trade-enabling industrial land, Canada’s ability to trade is threatened, which will impact us all.

Protecting agricultural land is important, and the Agricultural Land Commission has done an exceptional job of just that. Unfortunately, we don’t have the same protection for trade-enabling industrial land, which means the port authority and other goods movement businesses may have no choice but to consider agricultural land for expansion.

Our intent is to work with all potentially affected stakeholders, including the Agricultural Land Commission, to ensure we appropriately mitigate for any agricultural lands we convert to transportation and trade use.

We could look at land swaps, development of new agricultural land elsewhere or outside the Lower Mainland, and better use of existing agricultural land, among other ideas. We are open to input from stakeholders including the Agricultural Land Commission for the mutual benefit of the region and the country.

Vancouver Fraser Port Authority is advocating for a halt to the rezoning of industrial land, and a more thoughtful, multi-party discussion about management of land planning that will protect the region’s agricultural land and ensure Canada’s trade interests are similarly protected. Together, working with municipalities and others, we must protect what’s left before it is too late.